What are Next-Generation Probiotics (NGP)?

The gut microbiota plays pivotal roles in human health through interaction with the host (e.g. influencing the immune system or/and the physiology) and between the microbes, and thus its imbalance (or dysbiosis) are known to be strongly associated with the development of certain diseases.


Over the last decade, groundbreaking technologies such as 'next-generation sequencing (NGS)'' have made an enormous contribution to the microbiome study, enabling researchers to find out the differences of the microbiota between healthy and diseased states. Thanks to the comparative analysis, they have been able to identify some bacterial species present in low abundance in people with, for example, metabolic disorder such as type 2 diabetes. Some of the bacterial species have been demonstrated to have the efficacy to significantly improve specific diseases (e.g. Akkermansia muciniphila for metabolic disorder and Faecalibacterium prausnitzii for inflammatory colitis) and are widely considered to be potential candidates for so-called 'next-generation probiotics (NGP)', distinct from 'traditional probiotics' mainly composed of lactic acid bacteria or bifidus bacteria and currently available in the market.

It is defined as "bacterial cells of human origin, or their products, with a proven pharmacological role inhealth or disease" and thus includes live microorganisms and includes probiotics, bacteriocins, bacteriophages and bioactive molecules1,2. 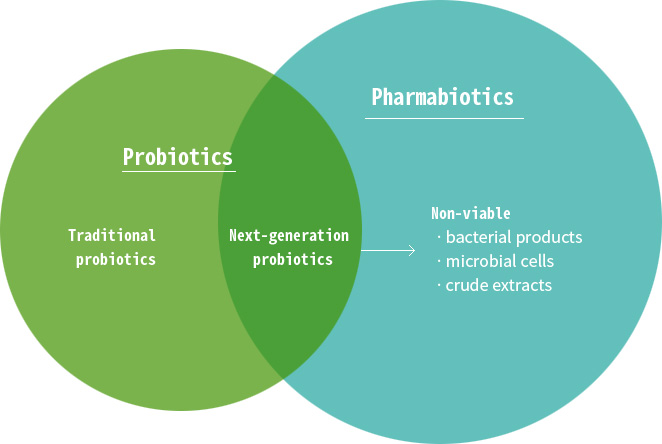